A Nosara Surfboard Shaper Going Back to Basics 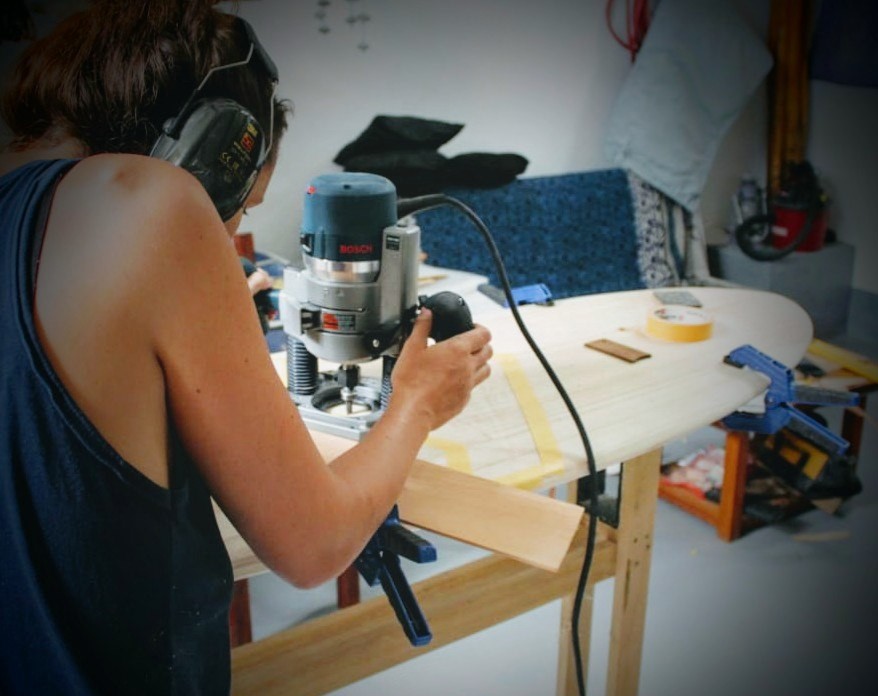 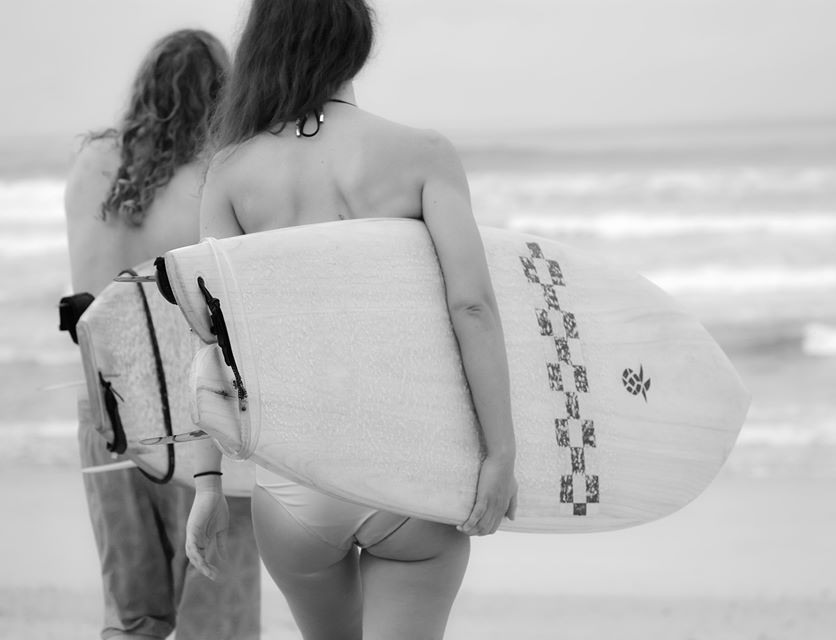 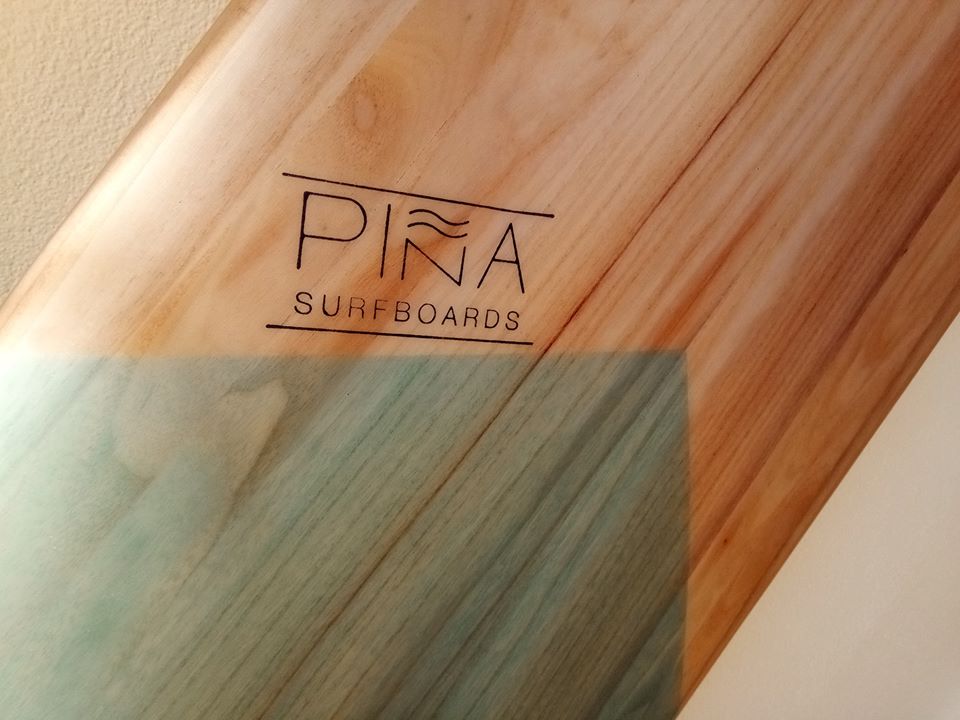 Mark Gray in his 2008 Surfer's Path  article ‘Getting wood’ eloquently summed up how it feels to ride a wooden surfboard:

“Likewise, you don’t have to be hyper-tuned pro to sense a different ‘feel’ to an epoxy board if you’re used to riding a polyurethane board. Therefore, it stands to reason that wood will offer a different set of sensations again. Any wooden board that has just a bit more heft than you’re used to will give a feeling of more drive when surfing down the line, more glide over flat spots, a greater ease in catching waves (especially with offshore winds), and a smoother drop on take off. In general, wood boards use gravity more effectively than superlight boards do.”

Whether hand planing, boating, kayaking, or bodysurfing, the act of riding waves likely began the moment humans learned to swim. However, standing on a surfboard is a relatively recent thing originally thought up by the Polynesians. The first written record of riding a board comes from the diary of explorer Joseph Banks aboard the HMS endeavour during Captain James Cooke's stay in Tahiti. Later it was observed in Hawaii, where Mark Twain wrote: In one place we came upon a large company of naked natives, of both sexes and all ages, amusing themselves with the national pastime of surf-bathing.

In 1907, after vacationing in Hawaii, Henry E. Huntington paid a group of young Hawaiian surfers to return stateside with him to Redondo beach, where he was looking to attract people to the area after investing heavily in real estate. Later, there was the famed Duke Kahanamokou, who introduced surfing to Australia, and went on to win a string of Olympic gold swimming medals. During these times, the characters may have been different, but they all had one thing in common. Their surfing weapons of choice, like they had been for thousands of years, were made of wood. They always had been, and were it not for the discovery of petroleum and its material derivatives, they would have remained that way forever.

When wooden surfboards appeared on the scene around ten years ago, the casual observer could have been excused for thinking this was a new invention, but it wasn't. In the 1940s, a revolution in materials and design meant that stronger, lighter surfboards could be produced. That was nearly 80 years ago, and since then, there has barely been a year go by without some new innovation hitting the market with varying degrees of success.

In recent decades, the global community has grown more environmentally conscious. At the tip of this movement has always been those who spend their time outdoors, especially in the ocean. Unlike other industries, the surfboard manufacturers quickly confessed that their plastic, epoxy, and foam products were terrible for the environment. For some, the answer was to get back to material basics, which meant returning to wood.

Modern wooden surfboards arguably began as a means for the board manufacturers to redress the environmental balance. Today, more and more surfers will attest that their wooden surfboard rides as well, if not better, than those made from traditional materials.

Right now, Nosara is a highly popular surf town fighting its own environmental battle. Consequently, as firewire and other brands increase their popular wooden surfboard designs, it was only a matter of time before some bright young local surf entrepreneur made their impact on the market. In this case, that someone happened to be Marce Pina:- a Nosara expat whose custom creations have been making waves of their own. Nosara.com sat down with Marce to find out more.

Where were you born?

I was born in Poland but grew up in Germany. At the Time Poland was still communist and my mom wanted a better future for me and my 2 older brothers. Luckily Germany accepted us as economic refugees and granted us asylum.

When did you begin surfing?

After I finished school I wanted to go "to the other side of the world" which kinda happened to be Costa Rica for me. I didn't know anyone and didn't have a plan. An architect in Tortuguero suggested Nosara so I took the bus to get there. That was september 10th of 2008. I loved it right away. The Jungle, fewer people, no internet, no distractions, only phone booths and landlines. I lived in Nosara first so I didn't really have access to the beach. I was always hitch hiking back then. In November of 2008 I moved to Pelada and that's when I started surfing - every single day.

When and why did you begin shaping surfboards?

Myself and my husband ran a restaurant for a few years but I realized that I needed to do something different. Making surfboards seemed the logical choice.

Who taught you, or were you self taught?

I went to Germany and signed up for carpentry school. I started researching on how to make wooden hollow surfboards in 2015 and came across a workshop to build your own surfboards.

What was the first board you ever made? How did it ride?

I made my first board in my basement: - "la Piña" - a 9'2 single fin longboard. Awesome board which I'm really proud of, although it was a bit hard to maneuver.

You choose to make surfboards from Paulownia and Balsa wood. Why ?

Piña Surfboards are a much better alternative to a regular foam board since they are much more durable and more sustainable. I also like to see them as pieces of art - surfable art. They are glassed with epoxy resin, which in the future I will try to get ecosap resin so the impact on the environment will be even less. My friends at Che Boards in Tamarindo are doing an awesome job glassing my boards.

How do your materials affect the surfboards performance?

Overall the boards might be a little bit heavier but no more than 30% of a conventional board. Aerials might be not so easy with them - but I don't know - I can't do them on a foam board either. On the up side, taking off particularly on bigger offshore days is easier because of their weight.

How many boards have you made since you began shaping?

So far I have made 19 surfboards.

What do you consider the key elements and skills of being able to shape a great surfboard?

I think being able to make great surfboards consist of a lot of skills combined. It starts in the virtual shaping bay when I'm designing surfboards with software. You have to be able to see the surfboard as a whole where elements connect with each other rather than just looking at the tail, then the nose. It should all flow into each other. Later on when I'm building and then actually shaping the board I don’t have much room for mistakes since the top and bottom deck is only 5 mm thick. The wooden boards I think are even harder to build since you basically have to build your own blank first. And wood, bends and cracks, and molds and breathes. I'm forever grateful for what I've learned in my 3 year apprenticeship.

How long does it take you to finish shaping a board?

My first board took me 6 months to finish in my spare time.  Now it takes me roughly 40 - 80 hours for each board depending on shape, size and design.

What's your favorite place to surf in and around the Nosara area?

My favorite wave around here is Osti - by far.

If I want one of your boards how do I contact you?

Starting this coming next season I'm offering wooden surfboard building workshops. It's a workshop over 4 days and anybody that is interested in this can do it! Follow my facebook page: Piña Surfboards for updates.

Nosara homeowners and the importance of native plants