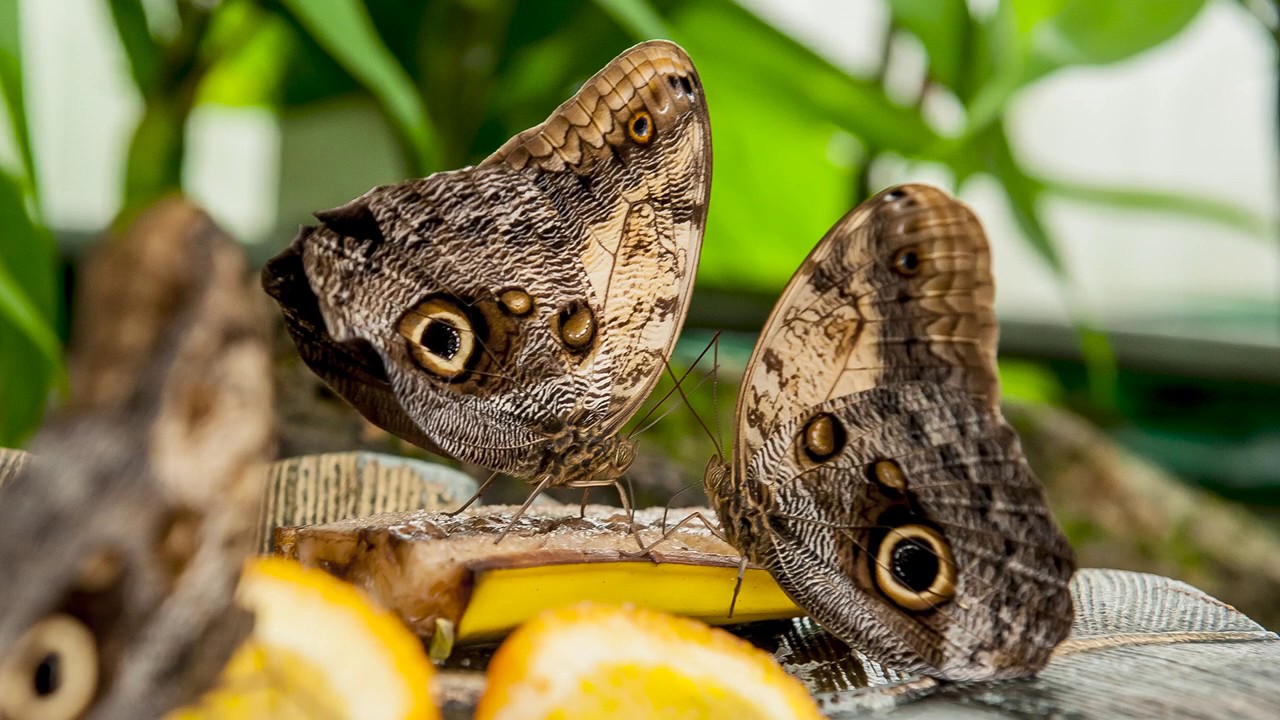 They are also one of the most easily approached and photographed species of butterfly. This is because in comparison to others, their time spent flying is comparatively little. When they do fly, they do so for only a few meters at a time, which is thought to be a defense mechanism against potential avian predators. 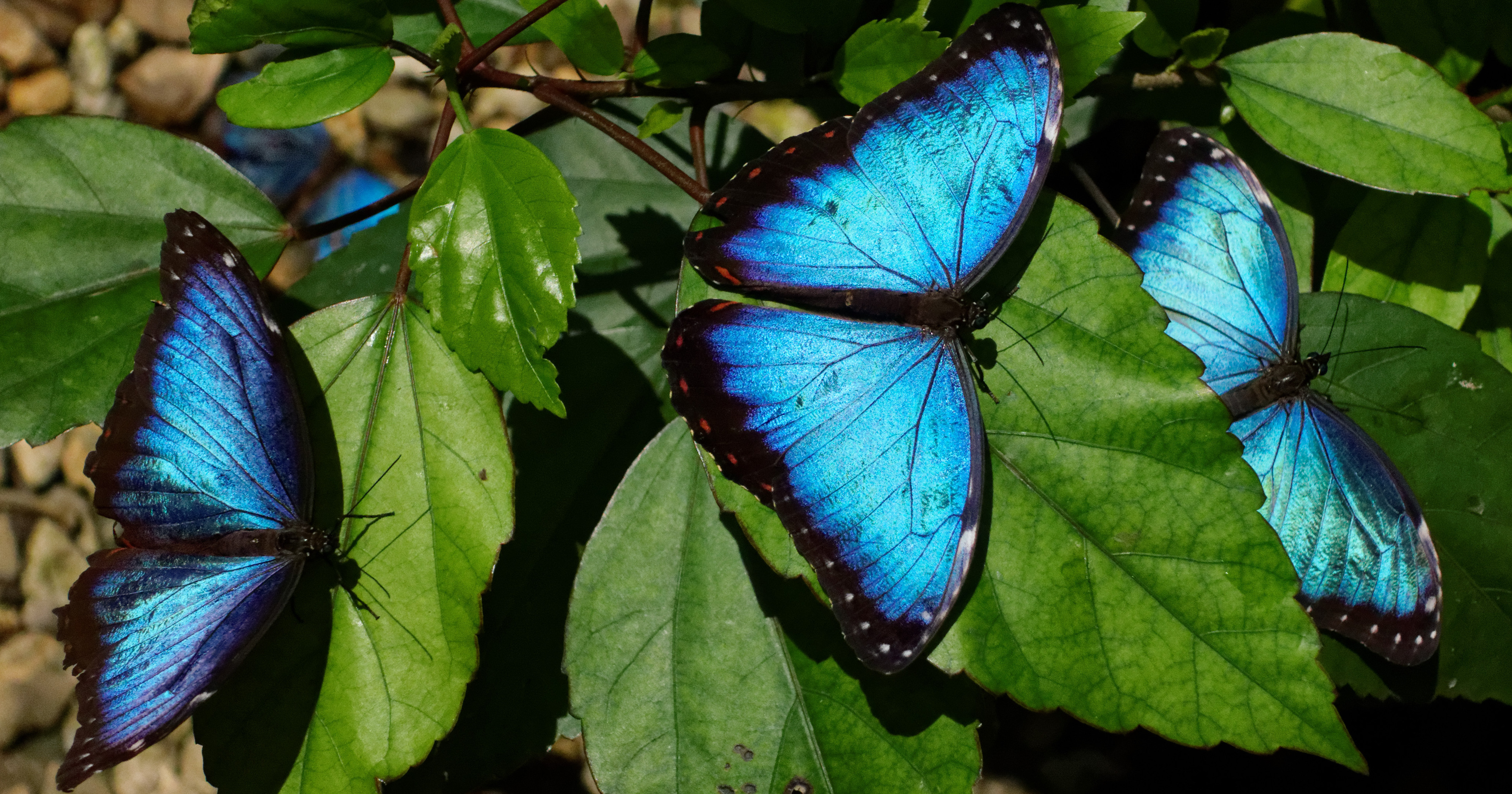 This amazingly beautiful creature can often be seen gracing the pages of Costa Rican tourism brochures. Notable for its large, radiant blue wings that can reflect light, the Blue /Morpho is found mainly in forests throughout the U.S., Mexico, and Costa Rica. The color in front of the wing is dull brown and features eyespots to protect them from predators like birds and insects. The dorsal or the back part is bright blue with a black edge. This bright blue coloring is the result of the microscopic scales which reflect light at its back. When the blue morpho flaps its wings the bright blue back is in contrast to the front dull brown which makes them look like they are appearing and disappearing into the air.

This butterfly can grow anywhere between 5-6 inches wide. After it emerges from a caterpillar state it spends its life cycle drinking the juices of rotting fruit, the fluids of decomposing animals, tree sap, fungi and wet mud through a proboscis like straw that protrudes from its mouth.

A Blue Morpho's habitat range extends from the tropical forests of Latin America through Mexico, Colombia and Costa Rica. Adult morphos spend most of their life on the forest floor at rest with their wings folded. However, when it comes time to mate, the blue morphos will fly through all layers of the forest in search of a partner. 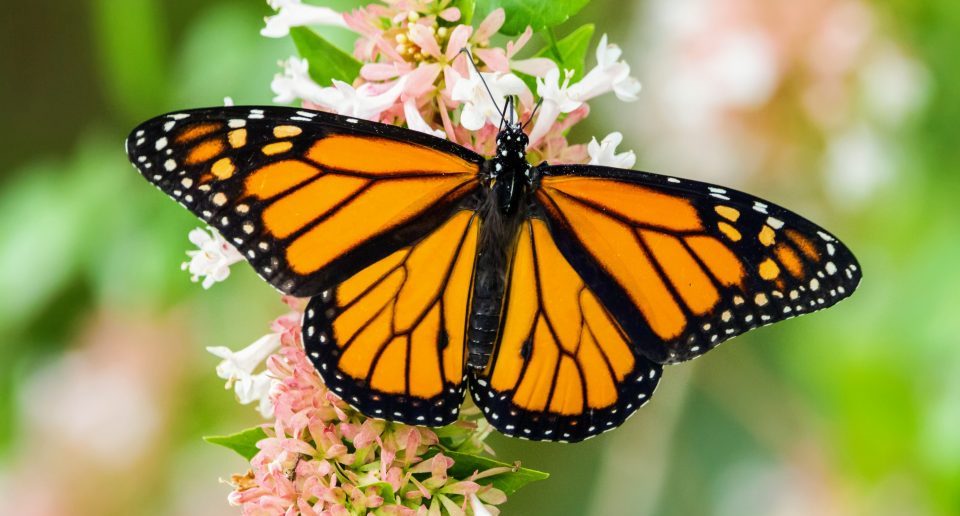 The Monarch Butterflies habitat extends throughout the entire globe. They can be found in both North, South and Latin America, and in much of the South Pacific including Southeastern Australia, New Zealand, Indonesia, Taiwan and the Philippines. There are even populations as far east as the Azores, Canary Islands, and off the coasts of Europe and Africa. However, the most interesting place Monarch Butterflies have been able to call home is in space. Some years back mating pairs of Monarch Butterflies were sent to the International Space Station where they were successfully bred.

In Costa Rica, Monarch Butterflies lay their eggs on a species of milkweed which also serves as their main food source throughout their lives. Monarch caterpillars munch the leaves along the stem of the plant. When the butterflies have undergone metamorphosis, they feed off of the nectar of the milkweed flowers. They also find nutrients in the nectar of other flowering plants as adults. 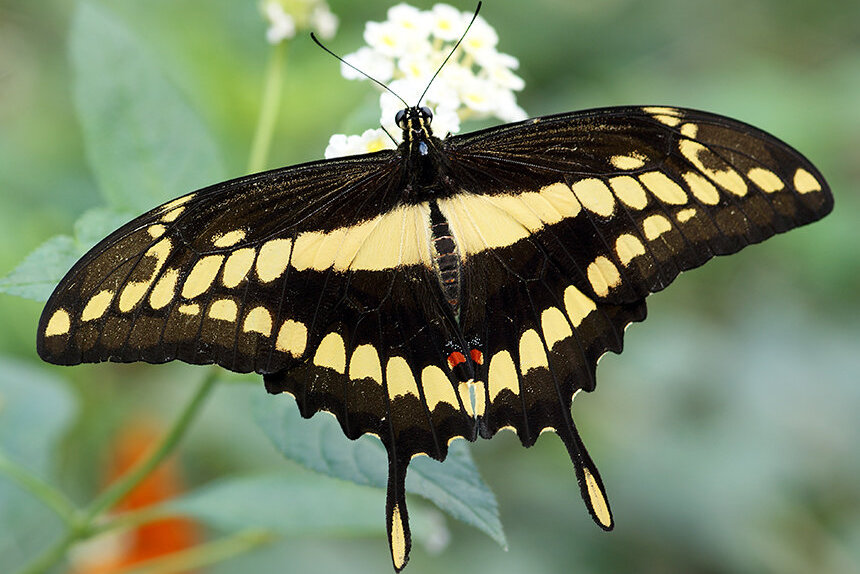 Although not quite as large as Owl butterflies, the Giant Swallowtails wingspan may still measure up to a whopping 16cm, making them by far some of the largest butterflies to be found anywhere on the American continent.

Giant Swallowtails are recognizable not only by their physical size, but also by the tail on each of the hindwings. Additionally, their unique markings consist of blackish brown dorsal wing surfaces, yellowish ventral wing surfaces, and two slightly irregular rows of yellow spots that merge before the tips of the forewings.

The Giant Swallowtail is abundant throughout North and Latin America. Though it is often valued in gardens for its beautiful appearance it can be a serious pest (particularly during its larval stage) to citrus farms, which has earned the caterpillars the names orange dog or orange puppy.