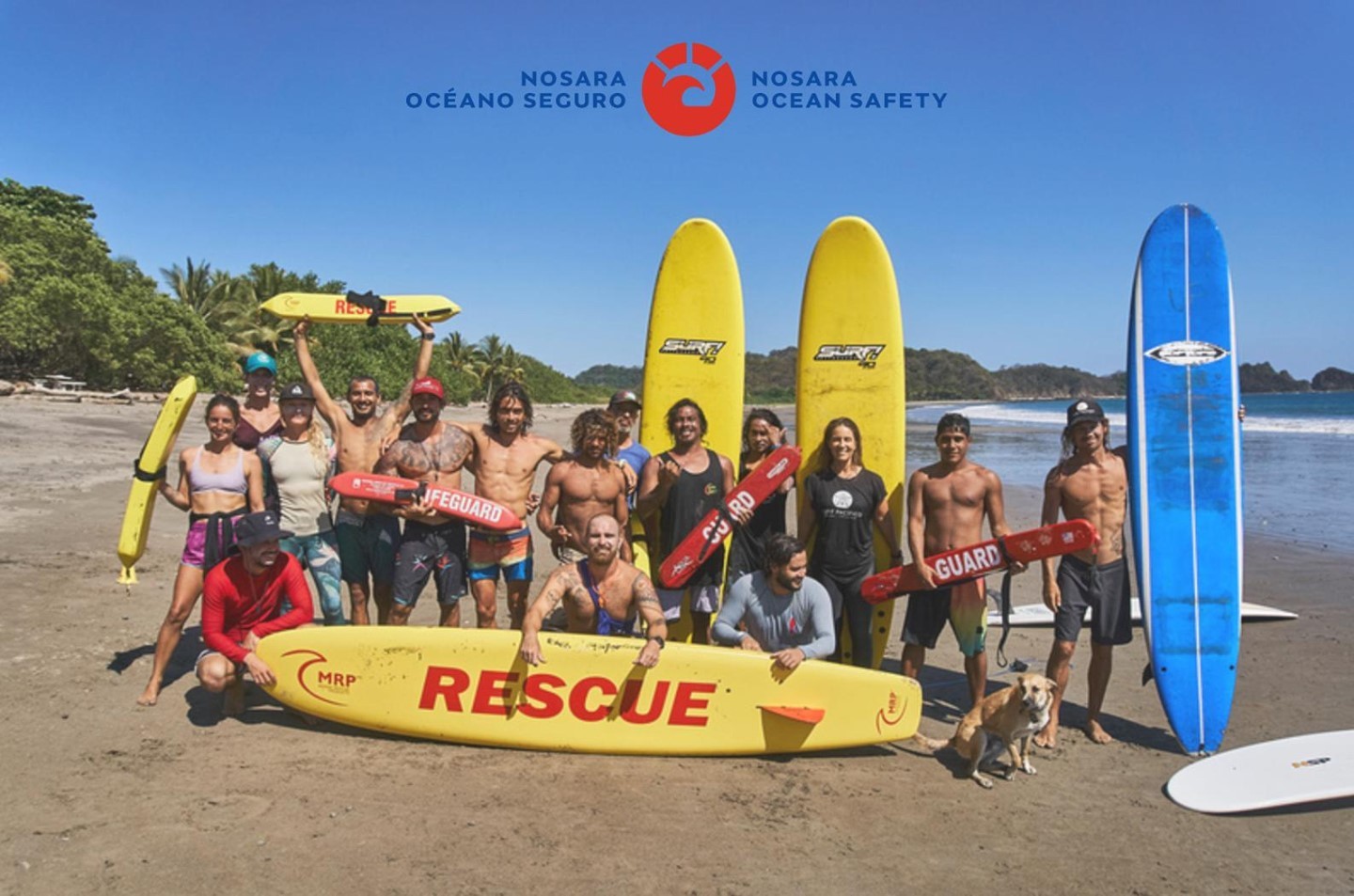 Over the holidays of this past year there were two fatal accidents in our beaches that brought attention to a much needed ocean safety prevention and awareness in the community, to prevent this from happening again. So business owners, parents, even kids are coming together to help in many different ways. And that’s how NOS (Nosara Ocean Safety) started. By the community, for the community.

We had the great opportunity to talk with Sarah Mendelson, the project manager of NOS, about the organization, and the ways people can help making our ocean a safer place. Here’s what she told us:

A little bit about NOS

The mission behind NOS is to have a knowledgeable and empowered ocean community, since this is a community that completely revolves around the ocean. NOS is all about celebrating the ocean, and the beauty in all the activities that it gives us. And we just want for everyone to be able to do that safely. We are a booming town, people are moving, and there are tourists visiting all the time. At that time, the aquatic safety response network that Nosara had couldn't keep up with how popular Nosara is. Now, as of June 2021, huge strides have been made between NOS’s community outreach initiatives and the Bomberos officially launching their lifeguard program with 3 salaried lifeguards.

When NOS came together in January, we identified that we needed a flag system to support the bomberos (firefighters) until they have a full lifeguard program. In the meantime, we are creating a surf guard team, which is a group of trained surfers, swimmers, and fishermen that have been trained in basic Ocean Safety theory and rescue. We also need to create educational materials for the community, that is for kids, families, visitors, hotels, vacation homes, locals, surf shops. And signage for the beach, we want to have signs at the beach that have emergency numbers for who to call if there's an aquatic emergency. That doesn't exist yet. There are signs right now that say it is dangerous, but those seem to be ignored a lot of times. So we want a sign that is a bit more informative. And another important thing that we’ve done is creating an alert network. Through our social media and our whatsapp group, we're able to let people know about big swells and currents.

The bomberos are the first responders and NOS is the community outreach. The lifeguards are going to be the ones going into the water to save people. And NOS is the group that is working on creating educational materials, creating training programs for the youth and adults of nosara, and creating awareness and respect for the ocean.

We've already trained 118 people in the 10 trainings we’ve done. In two and a half months, from February 14 until April 25. And people come away from the training very thankful, with a lot of knowledge about how to prevent accidents from happening, how to identify rip currents, and how to warn people about going into them. And then also they learn about how to actually rescue people. It is not a certification, it's just a training to teach people about the rescuing people out of the water, but having this knowledge is extremely empowering. And that's the mission of NOS to empower our community to help each other and make our beaches safe.

We've had an incredible response, we actually can't even host enough trainings because we have a lot of interest. In June, we'll be doing our first two groms trainings with a group of 10 to 14 year olds, and then 15 to 19 year olds. These trainings are available for expats, residents, and locals. We want to make sure that it's always accessible, so trainings are free for people who cannot pay for it.

What can people do to help NOS mission?

Supporting our fundraising efforts, we are trying to host more trainings, and we want to make those trainings accessible to everyone. We want to create educational materials that are accessible to everyone, and signs on the beach. We also need rescue equipment, we have all these initiatives that we need to make happen. And funding is a huge part of that.

We greatly appreciated the people that helped us walk up and down the beach to support the only lifeguard from the bomberos when the swell was big and town was busy. Now, as of a few weeks ago, we are happy to report that the bomberos Lifeguard program is in action and they have 3 lifeguards and over a dozen lifeguard volunteers.

It is a community effort. What people can do to help our mission is to just be responsible for themselves, that would be being aware of rip currents. Look around, see what's going on, what are the other swimmers doing. And then the other thing is not being afraid. If you see somebody that might be putting themselves in harm's way, say something. You can always go up to somebody and say, “Hey, right now the ocean is a little dangerous”.

How to contact NOS in case that you want to donate or volunteer?

Guidelines for what to do if you see someone in danger

In case of an emergency, do as follows:

If you live in Nosara, you can also be added to the NOS Emergency Group and you can contact the volunteer network of Surfguards:

- if support or rescuers are needed

*please email nosaraoceansafety@gmail.com to be added to this WhatsApp group.

If you do get caught in a rip current (or even if you are surfing and your leash breaks), the best thing you can do is stay calm. It’s always most important to conserve your energy.

By staying calm, you can assess the situation and you can signal for help by waving your arms or by yelling for help.

The rip current will take you away from shore, but once you are not fighting the current anymore, you can swim parallel to shore and then towards the beach once you are out of the rip.

How can community members and visitors alike be responsible beachgoers?

These guidelines aren’t specific to Nosara, no matter which beach you go to, it is alway a good idea to have these in mind!

When you arrive to the beach, be aware of your surroundings. For instance,

-Take a moment to notice if…

there are signs indicating that the area can be dangerous for swimming?

there any flags up or lifeguards patrolling?

other people are in the water? And if so, which areas?

-Take a few minutes (up to 15-20 sometimes) before getting in the water to see if the waves are big. Sometimes we arrive to the beach and the waves aren’t very big, but after 10 minutes a huge set can come through.

-You can always ask locals how the conditions are as well.

-Children should always be supervised

-Unless you are extremely confident that the water is safe, never go in past your waist.

-Not only do we need to be looking out for ourselves, but as a community we have a responsibility to help each other. If you see someone entering a potentially dangerous situation, we want our community to feel empowered to let them know that the conditions are not safe in that moment.

-Lastly, before leaving for the beach, it never hurts to check the surf forecast (even if you’re only going to swim) on apps like Magic Seaweed or Surfline. These apps can tell us how big the waves are, the time of the tides (rip currents are strongest during high tide and when the tide is going out), how many swells are in the water and how many seconds between periods. For help reading a surf forecast, stay tuned from NOS’s upcoming educational resources that will be accessible for the community. 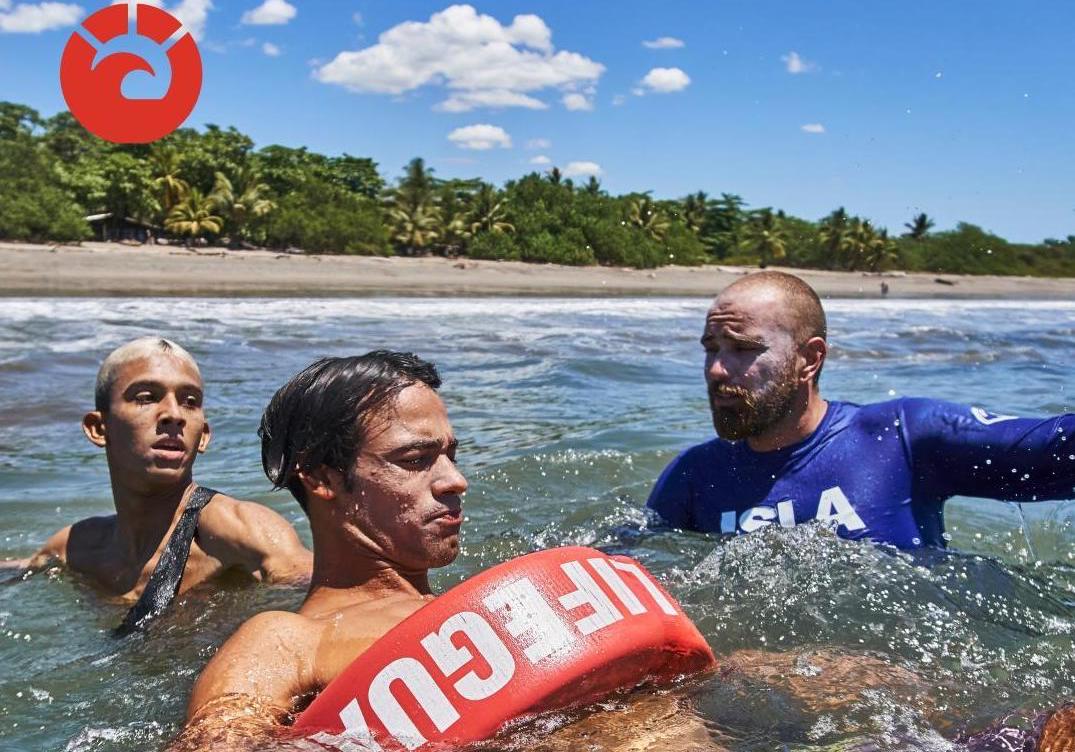