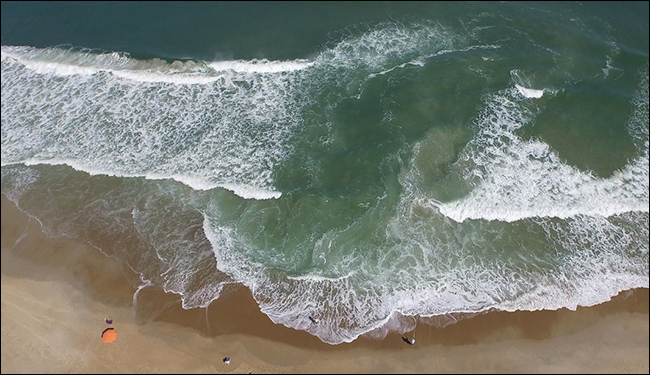 To kick off, let's briefly outline what a rip current, or 'rip tide' actually is. Rip currents form when water arrives on shore in the form of breaking waves. Naturally, this water must find its way back out to the open ocean. The route it chooses is the path of least resistance, a path that rapidly becomes a rip current.

In Playa Guiones answers surrounding rip currents will likely be dependent on who you ask. Ask any experienced surfer and they'll reply that a rip current can be their best friend. When you are as familiar with the ocean as the average surfer, rip currents can indeed be used to your advantage. On larger days, most surfers will actively search for a rip current before paddling out because they know it to be the quickest, most efficient, way of getting to the line up while using as little energy as possible.

However, not all visitors to Guiones are equipped with the same ocean knowledge as surfers. To non-surfers who nevertheless wish to go cool off in the ocean, a rip current can turn a beautiful day in paradise into a waking nightmare which can offer a very real glimpse into their own mortality. Fortunately, the majority of these incidents turn out okay. Unfortunately however, some do not, as evidenced by the small but significant number of drowning related fatalities that have occurred at Playa Guiones over the years. In light of this, here’s a brief but informative guide regarding how best to cope if one finds themselves being dragged from the shoreline. If we had to boil it down to one phrase it would simply be 'DON'T PANIC.' Enjoy reading, and remember, if in doubt, don't go out.

If you want more information about prevention, you can read here what with Sarah Mendelson, the project manager of NOS (Nosara Ocean Safety), told us about the organization, and the ways people can help making our ocean a safer place.

Prevention is better than cure, and the best tool you have to stay safe is knowing how to identify a rip current before it becomes a problem. As mentioned, a 'rip current' is a narrow channel of flowing water moving either adjacent to or away from the shoreline. Often, these bodies of water can be identified by a number of factors. They can look choppier or foamier than the water that surrounds them. Often, the texture and color of the surface of the water may differ from the water which surrounds it. Most commonly however, it can be identified as a flow of water where there is a gap in the breaking waves.

The fact there is little breaking wave action, coupled with the offshore water flow is precisely what can make them such a valuable ally to surfers. It offers them an express lane to the line up while keeping duck diving to a minimum. Although rip currents at Playa Guiones can form at any time they are often most prevalent at high tide. Use particular caution at such times.

Upon entering the ocean, if you begin to feel yourself being dragged either outwards or sideways this is a sure sign you've strayed into a rip current. If you're a non-surfer, and feel uncomfortable this is the time to get out, which is far more easily achieved from shallow water. Shallow water means you can keep a firm footing, and you'll likely be able to walk to shore. Once the water becomes neck deep, this option will be either difficult, or impossible.

What to do if you get caught in a rip current

First and foremost, REMAIN CALM. The task at hand will require a clear head, and panicking will not help you. Rip currents are most dangerous for those who are poor swimmers. In the early stages of being caught, try to flag the attention of other beach goers, particularly surfers by waving your arms and yelling for assistance.

If you get caught by a breaking wave, your only option is to approach this scenario with a surfers mentality; do what you can to swim under it, and don't be phased by getting rolled around underwater. Again, panicking will only reduce the energy you will need to resolve the situation. Remember, a rip current will not pull you underwater, only straight out to sea (even though it may not feel that way when a wave hits you.)

Go with the flow

At this stage it's vital to conserve energy. If swimming is proving fruitless then simply float or tread water instead of trying to fight the current. Once you are out past the breaking waves the rip current will begin to lose power.

If you decide to swim, then it's crucial to remember to only swim sideways, parallel to the shoreline. Many rip tide related fatalities occur because victims follow their natural instinct to try and swim back to dry land. Because there's literally zero chance that a human can outswim the power of a rip tide all this will achieve is to deplete your strength. Swimming against a riptide will only put you at a disadvantage when you eventually drift out of its power band. This is the time where you have an opportunity to swim back to shore, and a physical energy deficit resulting from time spent previously paddling against the current will only put you at a disadvantage.

Most rip currents subside or become weak enough to escape once you pass the breaking waves. Again, unless you decide to allow the current to carry you all the way out and wait for it to eventually dissipate, swimming parallel to the current is your only option. Conserve your strength.

The calm after the storm

Whether you've drifted all the way offshore, or you've managed to sideswim to a place where the rip is no longer present let's assume that you are now safely outside of the rip tides clutches. Now you have to get back to shore.

Remember that rip currents are usually present when larger waves are hitting the shores. As such, it's very likely that there will be surfers in the water, many of whom will (or should be) familiar with rip current avoidance and survival strategies. Signal for help. It's a safe bet that the first surfer who sees you will be more than happy to come to your assistance. In the unlikely event that there is no-one around to help you then remain calm and remember the information in the following paragraph.

Because rips are usually found on days where the waves are larger, you are now faced with the same dilemma any surfer who has ever snapped their leash has to deal with; how to get back to shore when there are large waves breaking around you. The short answer is to simply swim, and be thankful you've made it out of the danger zone. Remember that on a beach like Playa Guiones, although the waves may seem big, in reality they do not usually contain enough punch to hurt you or drive you into the sea bed. Neither do they have the power to hold you underwater for any longer than would be a threat to any reasonably healthy person. If anything, they will drive you faster and further towards the shore, so it's best to treat them as if you're body surfing, which involves just taking a breath and waiting for them to wash over you. To use a well-worn cliché this is the moment whereby you simply keep calm and carry on.

To conclude, it may be best to reiterate some opening lines from this piece. Remember that prevention is better than cure, and IF IN DOUBT, DON'T GO OUT.

Iniciative to reduce noise and speed in Nosara’s road